On Monday night my friend David Swanson organized a prayer vigil at the Chicago Police Department’s administrative headquarters. There were a few hundred people present, including dozens of clergy.

When David told me about the planning of the event, I was delighted in the way that a pastor is delighted when the church looks forward to a specific way to respond to crisis and social unrest. Having been bruised by the consequences leading up to the needs for our prayers, I was glad we’d be able to pray.

When I mentioned to our church that they should come, I told them that we’d be praying, not protesting. Of course, I’ve thought better of how I put it last Sunday. Still, here are my reasons why I’m grateful for the act of prayerful education in front of the police headquarters. 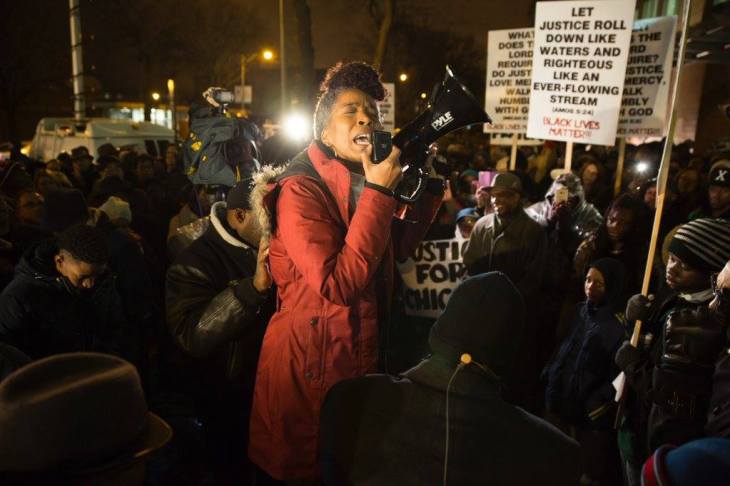 Photo Thanks to Geoffery Stellfox

Prayer was an education in what the church’s first role in society is. I remember taking a course in seminary on the church and community. I have a very specific appreciation for that class because it’s where I met Michelle Dodson, one New Community’s pastors. Beyond that, I recall the course introducing me to the language of organizing in faith terms. I remember that what we discussed in the graduate course was a reflection of what I lived at Sweet Holy Spirit when as a boy I built memories boycotting and chanting against something Daley did or didn’t do. What I don’t recall from our class discussions is how much we talked about prayer. I think we assumed it, but I don’t know if eleven plus years ago that prayer was explicit in the academic work we did. Now, I find myself saying in the midst of all the poverty of character, poverty of leadership, poverty of political will, and poverty of explicit justice for Black people in Chicago–and I’m hardly talking about the narrow and deep anguish of this latest moment–I find myself saying that prayer is our first response. There are certainly other things to be done. But at the bottom of those important next acts is the usually unseen gesture of regular prayer. We rehearse the happenings of this world in the ear of a God who expects to hear us. It’s what we do: the church prays.

Prayer was an opening to the wideness of an agenda unformed by our best plans. Pastor Swanson was caring in his planning, a post I’ll leave for the book he and I will write together one day. His manner in this circumstance will be its own chapter. What I will say is that he took care to plan to include a set of prayers from repentance to triumph. We were led in praying about apathy and action. And we were given time to pray as a people, not just being led in prayer by leaders. And there were enough reminders in the vigil that all his orchestration and prayer still had to be humble in the moment, open to the wide possibility of hundreds of people doing other things. There was a secondary protest that kicked off. There was a sister in the crowd with stated opinions and how we ought to pray. It was messy and lovely. Because what the gathered church did was become more open to what the Spirit was doing. And doing in the moment. The Spirit was taking what was done before, enriching it in the moment, and enlivening it for witness. We weren’t closed to those spontaneous expressions of grace. We were open because the church is open. The church invites.

Prayer was the connective tissue between people from varied social locations and ecclesial circles. People came from south suburbs and far north neighborhoods. I saw a sister pastor from Evanston. I met a guy from Humboldt Park. I have a new pastor friend who offered a prayer that moved us, and his church is near North Park. More than who I expected arrived. Their were people who I knew were Baptist and people who were from the Episcopal community. And we were all praying together. The vigil was diverse. Now, a lot of Black people were there. But a lot of non-Black people were there. Together, we held banners about Black life mattering. We chanted and prayed and lamented and declared the name of Jesus for sixteen minutes and beyond as we thought about the sixteen times a teenager was shot, killed over and over if a child can be killed more than once. We prayed for the officers in the CPD, knowing they “are our sisters and brothers and wives and husbands.” In that prayer vigil we weren’t from our different places, split from the whole. We were one. We showed that the church unites.

Prayer was the story, filled with the backgrounds, moments, and shifts of all our plot points. Pastor Harris encouraged the media to take their photos of a united church, a peaceful church, a justice-seeking church. He said that what was happening was the story. That the people doing what we were was the message worth sharing. All our stories converged at the moment. All our pasts and all our backgrounds, good and bad, with the police came to the fore. Present with us was the beautiful and the horrible, the joy and the sorrow. We stood and we prayed out of a collective consciousness that justice keeps at it because that’s the only response God would engender. We were in the moment with all those many moments, and we were there to call forth the basic goodness that springs out of our spiritual history. We were there to tell and to show that our story demands for a just end, a hope in the midst of death, a lovely treatment of Black bodies like they’re filled with the content of God’s splendor like any other body. We prayed in the name of the one who took embodied form to prove such prayers were expected. We prayed and in our praying we were telling that story because the church proclaims.