Am I wrong for despising the pacifier?  I still remember that we had taken it from the boy, safely removed it from his mouth, back in January.

He got passed it.  He was beyond it.  He was fine.  Then he got sick.  And Dawn gave him the thing.  It was a moment of weakness probably.  I don’t think I was home.  I don’t think I found out until some time the next day.  I have a rule about not going into his room when he’s down for bed.  So I wouldn’t have found the thing stuck in his mouth until he popped his head up above the blanket flapping over his crib, his cheeks and lips folding up into a smile I couldn’t see because the white circle. 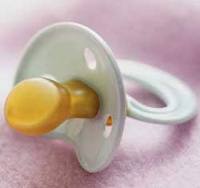 “Take that out,” I said, using my fathering voice.  He took it out.  And that started a ritual for us.  He’d wake up and call for us.  If I came in, I’d tell him to remove the pacifier.  He would.  One day it turned into the nonverbal gesture of my finger falling from my mouth.  And then, later, I wouldn’t even need to do that.  He’d see me turn the corner to his room that has no door, and he’d remove it when he saw me.  He still does it.  If he has it in his mouth and I’m around, the thing comes out without request.

I’m good at holding on to small memories like that—that being my wife returning the plug to the boy.  I’m a little too good at it actually.  I bring it up from time to time.

I say that it was a mistake to give it to him.  I say that I didn’t give it to him and that I’ve never actually given it to him since we took it from him, except for twice maybe, even though I don’t physically remove the thing from his crib.

I’m good at keeping a commitment.  And every time I see that pacifier, it’s a symbol of a commitment discarded.  He doesn’t need it.  I know he doesn’t because I’ve put him to bed without just to get proof for those women who I love and who love him.  If he drops it out of the bed, I pick him up and tell him to get it himself.  When he wakes up at night, crawling and scraping for the thing, I’ll put him on the floor and tell him to walk around the bed and get it.  “No light,” I say.  I have to include some punishment for him waking me up.  And he will get it.

Am I wrong?  It’s his pacifier.  I got rid of mine years ago.

Since January we’ve had these false attempts to take the thing.  But the grandmothers got in with Dawn to prevent success.  They did their own thing, when their own thing was secretly my wife’s thing.  They all colluded to keep my son’s mouth shut with a mini plastic nipple, making it a “necessity” for bedtime.  As I’ve said to them and to you in the paragraph above, it’s not a necessity.  He’s got them fooled.

At least they abide by the law I laid, I told myself.  “He only gets it when he’s in the bed.”  Success.  It’s interesting how I’ve started redefining my words since the boy came along.